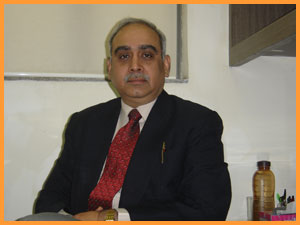 Dr. Sarwal is an alumnus of Punjabi University, Patiala where he completed his basic medical studies(MBBS) & MS (General Surgery). Then he attained his M.Ch in Cardio- Vascular & Thoracic Surgery from the famous  PGIMER, Chandigarh. During his MS, he got valuable experience of teaching Undergraduates for two years and another 2 years teaching to postgraduates during his M.Ch at PGI.

Dr. Virendar Sarwal had his initial career stints with famous Escort Heart Institute, New Delhi, Batra Hospital, New Delhi and Apollo Hospital, New Delhi. Then he joined the faculty of PGIMER, Chandigarh, as Assistant Professor and was instrumental in starting the Coronary Bypass programme & designing the upcoming Advanced Cardiac Centre. He was also the Chief Surgeon at Malhotra Heart Institute, New Delhi. Then he got associared with Fortis Heart Institute, Mohali as Senior Consultant and was instrumental in achieving highest success rate (100% in 300 consecutive cases) during five years of assocciation. In addition to this, he has also played a key role in the design & commissioning of City Hospital and Heart Care Center, Chandigarh (now Mukat Hospital ) where he worked as Founder Director (Medical) and Sr. Cardiac Surgeon.

His expertise areas include:

To his credits, Dr. Srawal, has been honoured by numerous national  & international awards viz.,

Dr. Sarwal has contributed an ample number of research papers in the domain of Cardiothoracic & Vascular Surgery to various international & national journals and has presented them in various conferences held nationally as well as internationally.