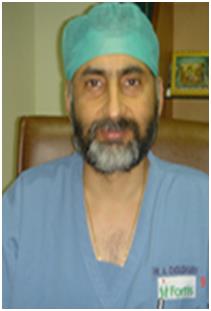 Dr. Choudhary being a marvelous student since the beginning is an alumnus of the prestigious S. P. Medical College, Bikaner and bagged Dr. Indu Goyal Memorial Gold Medal for being the topper in MBBS in the year 1989. Thereafter, he went to SMS Medical College, Jaipur to accomplish his post graduation in General Surgery. During his masters, he developed a keen interest in Cardiothoracic Surgery and henceforth attained his super specialization from SGPGI, Lucknow in the field of Cardiothoracic  & Vascular surgery. Subsequently, he attained DNB in Cardiac Surgery. After that, he joined Batra Hospital, New Delhi, one of the most renowned hospitals of the country where he served as Consultant – Cardiac Surgery. Later, after 3 years of experience, he got selected for the Starr Ahmed International Fellowship in the USA, where he got an opportunity to work with Dr. Albert Starr, who has performed the first heart valve replacement surgery in the world and has also designed the Starr Edwards Ball & Cage Valve. During his stay in the USA, he also got to work with Dr. Storm Floten, Dr. Aftab Ahmed and Dr. Jeffery Swanson. After his return to India, he re- joined Batra Hospital, New Delhi, as a senior Consultant for another two years stint. From then on he has been associated with the Fortis Hospital, Mohali.

Dr. Choudhary is well known for his accomplishments in the international medical canvas and has successfully performed 12,000 surgical procedures. He has also contributed his research papers to many National & International journals. He actively participates in workshops & conferences held worldwide to hone his practical skills with the latest techniques and technologies in the field of Cardiothoracic & Vascular Surgery.

***Very very bad on open heart surgery............worse then terrorist they loot you before the kill you.